Drought-tolerant grasses have characteristics that allow the lawn to stay alive and green for a long period of time under drought conditions and heavy water restrictions.

Many drought-tolerant grasses can survive and even maintain a green colour.

Behind a lawn’s drought tolerance are characteristics of an efficient root system, above or below the ground, that repairs bare or damaged grass.

Many drought-resistant grasses also can go dormant during harsh conditions but are able to recover when water can be re-applied.

Zoysia grasses are more drought-tolerant and water-efficient than the Couch, Kikuyu and Buffalo varieties. This is largely due to their ability to go dormant for up to five weeks during drought conditions without dying, as their deep rhizomes can self-repair drought damaged or bare lawn.

Zoysia grass, such as Empire or Nara Native, would be the most drought tolerant grass needing only about 2.5cm of water weekly to maintain a green colour. Nara Native™ is one of the highest drought-tolerant Zoysias on the market that doesn’t sacrifice looks or softness under tough conditions.

Watering of Native Nara should occur infrequently but deeply and early in the morning.

Nara Native turf can be found in the Northern Territory, Queensland, New South Wales, Victoria and Western Australia. Your local Nara Grower suppliers can easily be found with our online supplier locator tool.

Price wise and for a low maintenance Zoysia, Nara costs between $11 and $16 per square metre. To get more Nara Zoysia pricing info, visit our Nara Zoysia™ info page and get 3 quotes from your local growers today.

Empire Zoysia™ is another excellent choice for regions where water restrictions are frequent and long dry periods prevail.

It is Empire Zoysia’s long thick stolons which seek out soil moisture that give it the ability to survive in low rainfall areas.

During drought conditions, you only need to water your Empire Zoysia when you notice leaf wilting.

Water your Empire Zoysia infrequently and deeply early in the morning.

Price-wise –  Empire Zoysia is one of the most affordable high-quality lawns on the market, retailing between $12 and $16 per square metre. To get more Empire Zoysia pricing info, visit our Empire Zoysia™ info page and get 3 quotes from your local Empire growers today.

Couch turf is another good choice for drought tolerance and those under water restrictions, remaining green for a long period of time in harsh conditions. It is Couch’s robust deep-rooted system that allows it to recover easily if the lawn dies-off due to heat and lack of water.

Couches such as OZTUFF® and Stadium Sports® are also some of the first grass varieties to recover from drought conditions.

OZTUFF® Couch is an excellent option if you want a grass that stays green and recovers rapidly following drought conditions.

Watering of Oztuff Couch should occur when you notice the lawn browning off.

Infrequent deep watering of your Oztuff Couch is recommended early in the morning.

OZTUFF Couch turf can be found in Queensland and New South Wales. Your local grower suppliers can easily be found with our online supplier locator tool.

Price-wise and for a low maintenance Couch, OZTUFF costs between $8 and $10 per square metre. To get more OzTuff pricing info, visit our OZTUFF information page and get 3 quotes from your local growers today.

Another drought-tolerant Couch on the market is Stadium® Sports Couch.

During drought conditions, Stadium Sports is supported through large underground runners that give it vigorous survival characteristics.

Stadium Sports Couch’s deep-rooted system means you only need to water when you notice wilting.

Stadium Sports Couch can be infrequently, deep watered early in the morning.

Stadium turf can be found in Queensland and New South Wales. Your local Grower suppliers can easily be found with our online supplier locator tool.

Price wise and for a low maintenance Couch, Stadium costs between $8 and $10 per square metre. To get more Stadium Couch pricing info, visit our Stadium® Sports Couch info page and get 3 quotes from your local growers today.

Kenda Kikuyu breeds such as Kenda Kikuyu® are sterile varieties, meaning they don’t spread as much and don’t contain many seeds – good for those with allergies.

To maintain Kenda’s hardiness mow every 7-10 days during hot months and every 3-6 weeks during cooler months.

Deepwater your Kikuyu Kenda, when you notice the grass wilting, every 7-10 days and early in the morning between 7am and 10am.

Kenda Kikuyu can be found in Queensland, New South Wales, the ACT, Victoria, South Australia and Western Australia. Your local grower suppliers can easily be found with our online supplier locator tool.

Price wise – Kenda Kikuyu is also one of the most reasonably priced grasses between $7 and $10 per square metre. To get more Kenda Kikuyu pricing info, visit our Kenda Kikuyu® info page and get 3 quotes from your local growers today.

Buffalo grasses, such as Prestige®, Sapphire Soft Leaf® or Palmetto®, all have above-ground stems called stolons as well as a deep root system that helps repair drought-affected lawns. If drought conditions do prevail, Buffalo grass will require some watering to survive.

For those wanting cool-season grasses, the shade-tolerant varieties are Fine and Tall Fescues.

Buffalo grasses are the most shade tolerant varieties on the Australian market. Under the banner of Buffalo Turf’s, there are a plethora of different varieties.

Palmetto Buffalo® is one of these varieties. Sporting a large deep-rooted system that allows it to be one of the more water efficient turf types on the market.

During drought conditions deep water your Palmetto Buffalo every 7-10 days early in the morning – between 7 am and 10 am.

Palmetto grass can be found from Queensland down to Victoria and across in Western Australia. Your local Grower suppliers can easily be found with our online supplier locator tool.

To find suppliers of Palmetto grass near where you live go to Find a Turf Supplier. 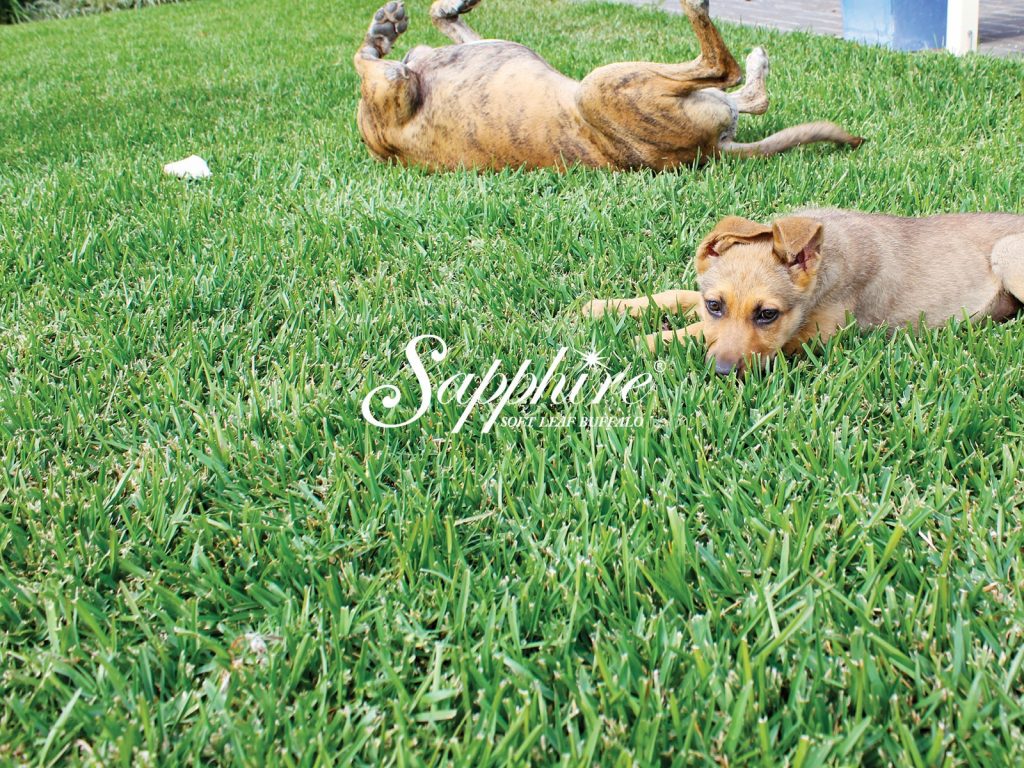 does tolerate drought conditions but once you see your grass wilting water accordingly.

Infrequent deep water is preferred for Sapphire Soft Leaf Buffalo and early in the morning when less water loss occurs.

Prestige Buffalo’s deep-rooted system means it is an efficient water user that can also maintain its green colour for longer during drought conditions.

If long drought conditions prevail don’t let your Prestige Buffalo brown-off for longer than a week otherwise it will take longer to recover.

Water your Prestige Buffalo deeply every 7-10 days during drought conditions.

Sapphire Buffalo can be grown in Queensland, New South Wales, Victoria, South Australia and Tasmania. Your local Grower suppliers can easily be found with our online supplier locator tool.

Price-wise – As one of the newest Buffalo’s on the market, Sapphire Turf is reasonably priced to afford you a good-looking lawn between $10 to $15 per metre square. To get more Sapphire Buffalo pricing info, visit our Sapphire Buffalo info page and get 3 quotes from your local Sapphire growers today. 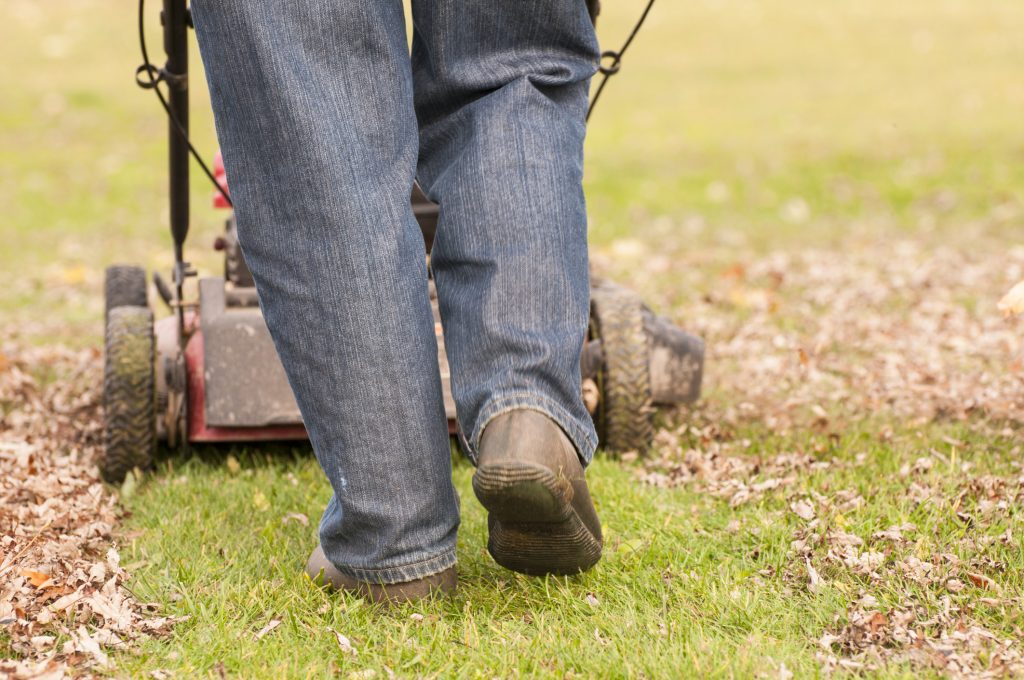 Obviously mowing during drought conditions will vary depending on how much water you can apply to your lawn.

The main point is to not mow your lawn too low during prevailing dry conditions.

For Zoysia grasses mow every 3 to 4 weeks to a height of between 35mm to 45mm.

Couch grasses should be mown to no more than 50mm every 7-10 days.

Kikuyu grasses, during drought conditions, should only be mown to a height of 20mm to 50mm.

Drought tolerant Buffalo grasses can be mown every 7-10 days to a height of 45mm.

Water your drought-tolerant grass varieties only when you notice the lawn browning off or wilting.

Deep watering should occur early in the morning between 7 am and 10 am.

The moment drought conditions first start arriving, and this can include when heavy water restrictions are put into place – is the same moment that it’s time to start preparing lawns for the greatest chances of ongoing health through these difficult times.

Below are two of our recommended strategies you can apply to prepare and safeguard your lawns in times of drought.

Two strategies can be applied:

For more fast facts and Q&As on our varieties

Or check out our handy Quick Lawn Selection Guide. 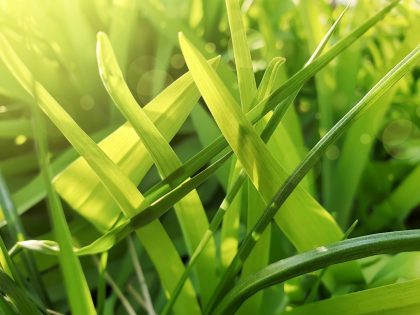 What lawn leaf do you want?

Many homeowners prefer a particular leaf that resonates from childhood or where they have seen turf in different areas such as sports fields or gardens. Different grasses have ... The benefits of turf 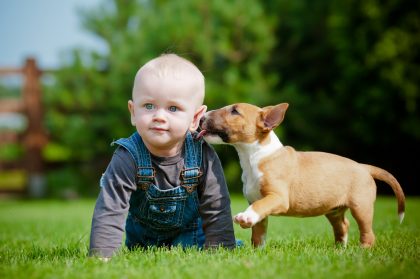 FAST FACTS Hard-wearing Deep-rooted system Quick recovery from damage Soft underfoot and to touch Many families want a luscious green lawn that can cope with the heavy traffic ... 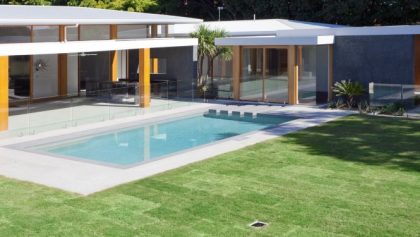 Choosing the Right Turf for Pets and Kids

When it comes to creating a luscious lawn, choosing the right grass variety can be challenging. There are a wide range of factors to consider when choosing a lawn from, how ... 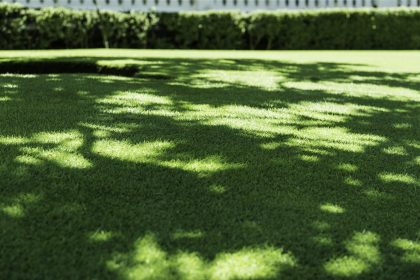 CONSIDERATIONS Evaluate the amount of sunlight your lawn receives per day - shade-tolerant grasses do need at least three to four hours of direct sun or four to six hours of ...