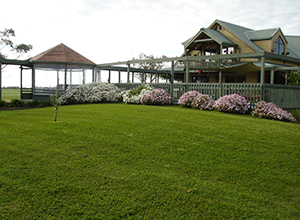 Picture your typical backyard BBQ, and chances are you’ve summoned an image of one of two of Australia’s most popular lawns – Couch and Buffalo.

These two big hitters are popular, with good reason – both have proven themselves to be very well suited to Australian climates, and deliver the lush, green lawn that we all dream of. But which one to choose?

In this article, Couch and Buffalo go head-to-head to determine which one should be at the top of your garden renovation list. 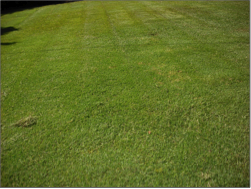 Couch grass is a hardy warm-season grass. A native of Africa, it is a popular lawn variety in Australia thanks to its excellent performance. The deep green color of this turf stays vibrant and is soft underfoot in the winter, making it a great choice for outdoor play for kids and pets.

The rhizome and stolons of couch grass spread horizontally. As a fast-establishing variety and one that can be easily repaired, it may require more frequent mowing than other grass types.

Couch grass does not perform well in highly shaded areas – it is a sun-loving variety that requires more hours of sunlight each day than many other varieties for peak health.

That said, in sub-optimal conditions, Couch grass will tend to go dormant, but has the ability to bounce back quickly once conditions improve.

Couch grass has a deep rooted system, that means it demonstrates excellent drought tolerance. In times of water restrictions, Couch lawns are able to survive, and quickly revive once water becomes available again, which makes them a great choice in drought prone areas.

As a fast-growing variety, Couch requires regular mowing. In warmer months, cut every 7-21 days, depending on how often you fertilise. Couch grass will tend to brown off in winter, so you should cut it a bit longer during the colder months.

It is recommended that you fertilise your Couch lawn twice a year: once in early April (autumn) and once in September (spring). To encourage a Couch lawn to grow faster or to increase wear tolerance, fertilise more frequently.

When well-established, Couch is highly drought tolerant – but, like all plants, it needs water to grow. Environmental factors will influence requirements. Couch lawns require more water in a dry climate.

Couch turf benefits from infrequent deep watering, which promotes a healthy lawn and a strong root system. It is best to water early in the morning.

As a vigorous grower, Couch generally outcompetes most weeds, provided that it is kept in good condition.

Couch grass is well known for its excellent wear tolerance. It is an excellent option for areas where there will be a lot of foot traffic, and it can handle pets or children running around. It forms a moderate layer of thatch to protect against damage, and its deep roots support quick recovery if the grass is trampled.

Known as “the lawn that can take care of itself”, OZTUFF also has the highest salt tolerance of any Couch variety making it suitable for beachfront properties and pool sides.

OZTUFF is suitable for all growing environments along the eastern seaboard from Brisbane down to Melbourne.

This tough Couch variety grows well in areas from Sydney through to mid-north Queensland. 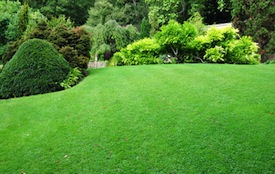 Australians love Buffalo grass for a variety of reasons. As one of the most shade-tolerant grasses available, it is known for its deep green colouring, vigorous growth, and resistance to weeds. Buffalo grass maintains good colour through winter and is tolerant of a variety of climatic extremes. New varieties have been bred to feel soft and luxurious underfoot, making Buffalo a highly desirable variety for homeowners across Australia.

Buffalo varieties are known for their exceptional shade tolerance, requiring as little as 3-4 hours of sunlight each day. Sapphire Buffalo is one of the most shade tolerant varieties on the market, tolerating up to 70% shade in dry conditions.

Buffalo grass grows well in full sun, and has a large, deep root system, which allows it to grow deep into the soil to obtain moisture. This makes it an efficient water user, and a good choice for drier climates.

Buffalo has good recovery from water stress thanks to its fast growth habit, which means it will stay greener for longer through the summer months.

To maintain a healthy lawn, you should mow your Buffalo turf at 25mm – 50mm in full sun and increase to 50mm – 70mm in shaded areas.

Frequent and shallow watering is recommended once your lawn is established. The deep roots of Buffalo grass mean it can draw moisture from the soil, helping it survive during dry, hot conditions.

Buffalo is terrific at outcompeting weeds, especially if it is kept healthy. Weeds should be monitored, and treated with a herbicide that is suitable for buffalo grass. You should also keep an eye out for Lawn Grubs and African Black Beetles.

Buffalo grasses are very resilient, so they are ideal for use in yards with children or pets, as they recover quickly from wear. 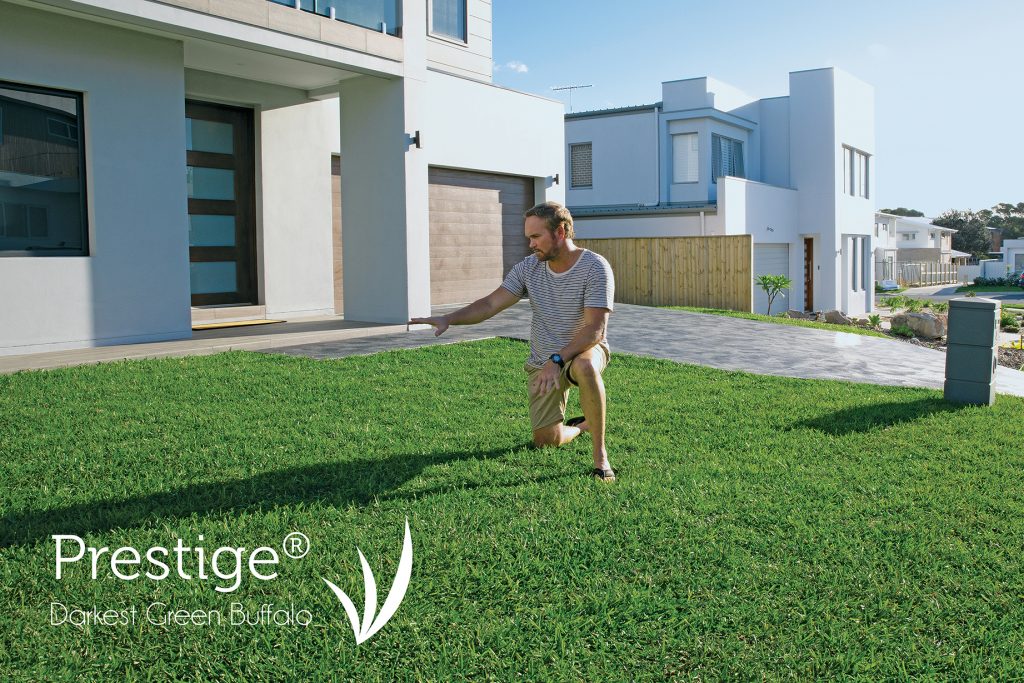 If you’re looking for a soft-feel Buffalo grass with high shade tolerance, Sapphire Buffalo is your best choice. Independent research has found that Sapphire Soft Leaf Buffalo, in 70% shade cover, maintains quality and growth and outperforms other Buffalo varieties. Featuring a deep green colour that is maintained through winter, Sapphire is a water efficient, low maintenance lawn variety.

The biggest selling Buffalo in the World, Palmetto offers low maintenance, less watering and is a great hard-wearing option family with kids and pets. Palmetto’s dense growth means it is harder for weeds to invade the lawn.

Couch vs Buffalo - the Verdict

These two popular lawn varieties have a long history because they are both excellent lawns for the Australian climate.

If you’re looking for a beautiful lawn year-round, you really can’t go past a Buffalo lawn. With its brilliant green colour which persists through winter, Buffalo is very hard to beat. In contrast, Couch grass tends to brown off in winter, and while it bounces back once the weather warms up, it certainly doesn’t look its best through the cooler months.

For a hard-wearing lawn that withstands high foot traffic, Couch delivers in spades. Ideal for gardens with pets and children, it can support a bit of trampling. However, it doesn’t grow well in the shade. Buffalo has excellent shade tolerance, which means it performs better than Couch in gardens with trees or shade due to buildings. This also means that Buffalo comes into its own in winter, where fewer hours of sunlight can make it hard for other varieties to thrive.

Both varieties have excellent water efficiency and drought resistance. Couch has a slight advantage in areas that are subject to water restrictions, but again, you should expect your Couch lawn to brown off in winter, as it doesn’t cope well at low temperatures.

Finally, if you’re on a budget, Couch is slightly more cost effective at installation, with prices ranging from $8-$14 per square metre. Buffalo is slightly more expensive, and you can expect to pay between $12-$20 per square metre. That said, Buffalo may be a savvier investment once you consider maintenance costs, plus you’ll have a beautiful, green lawn year-round.

There are many factors to consider when choosing a lawn grass for the home garden. Couch and Buffalo are two varieties that are well suited to the warm Australian climate. If you’re after a hardy, wear tolerant variety that requires little watering, Couch grass is a reliable choice. But if you’re after a low maintenance lawn offering beauty, durability, and low maintenance, Buffalo grass is the clear winner.

The best person to advise on the right grass selection for your home is a local myhomeTURF turf farmer of supplier, who will be familiar with the conditions in your local area. Use Find a Turf Supplier to locate a supplier in your area.

To view our full range of turf varieties, check out our  Find Your Turf page. 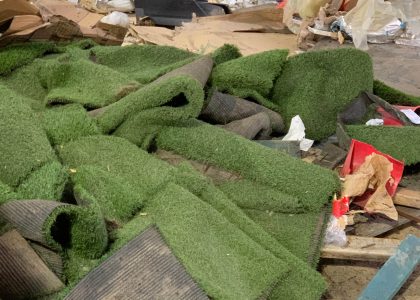 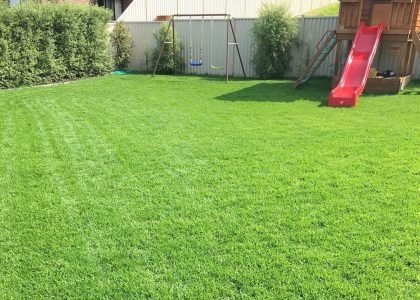 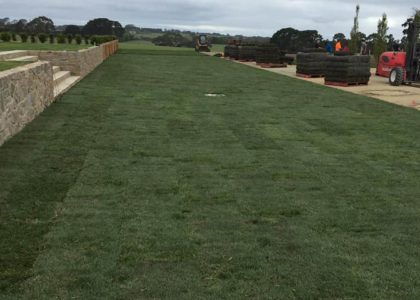 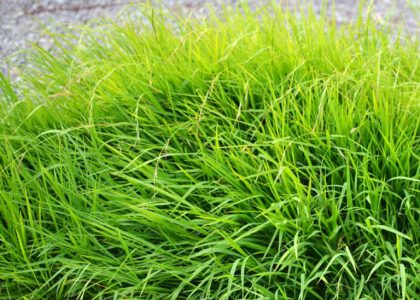 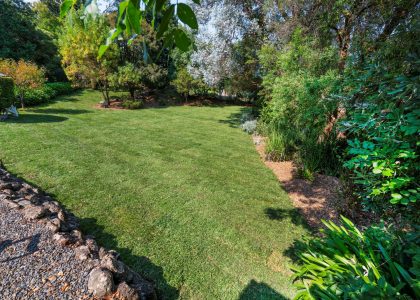 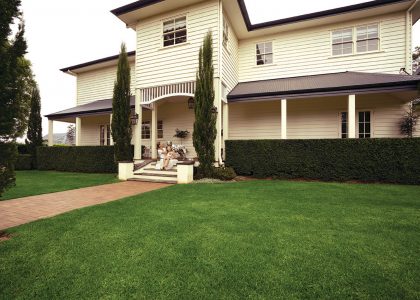