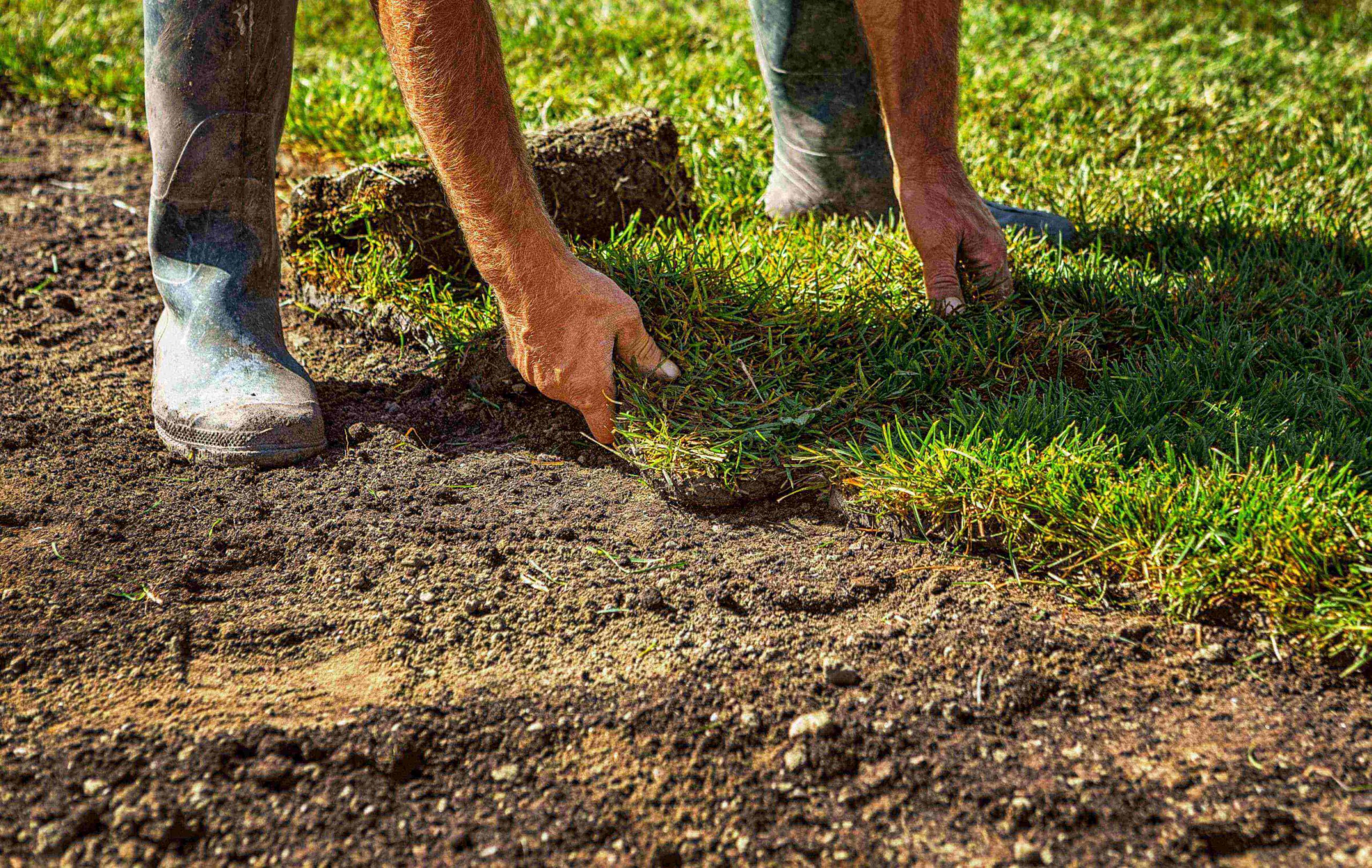 myhomeTURF has graced your screens on the new DIY series – DVine Living – hosted by former “The Block” favourite Dale Vine.

Over four weeks, the myhomeTURF team and Dale, himself a landscaper, designed and assisted in delivering a five minute TV segment outlining the whole DIY lawn process from start to finish at four different Melbourne locations.

Job 1 is a new house build where homeowner Nick (pictured above left) offers a great challenge to Dale and the team.

With any new house build, landscaping is often the last item on the list and it’s also when the budget is at its tightest. For hardworking Nick, his new house looked lovely, but the surrounding area was a clay pit!

So Dale Vine and the myhomeTURF team worked alongside Nick to explain to him an easy fix that would make his new house site usable on a budget and become the envy of the street!

The challenge for this particular home was how to take the yard from dirt to something the homeowners could be proud of? 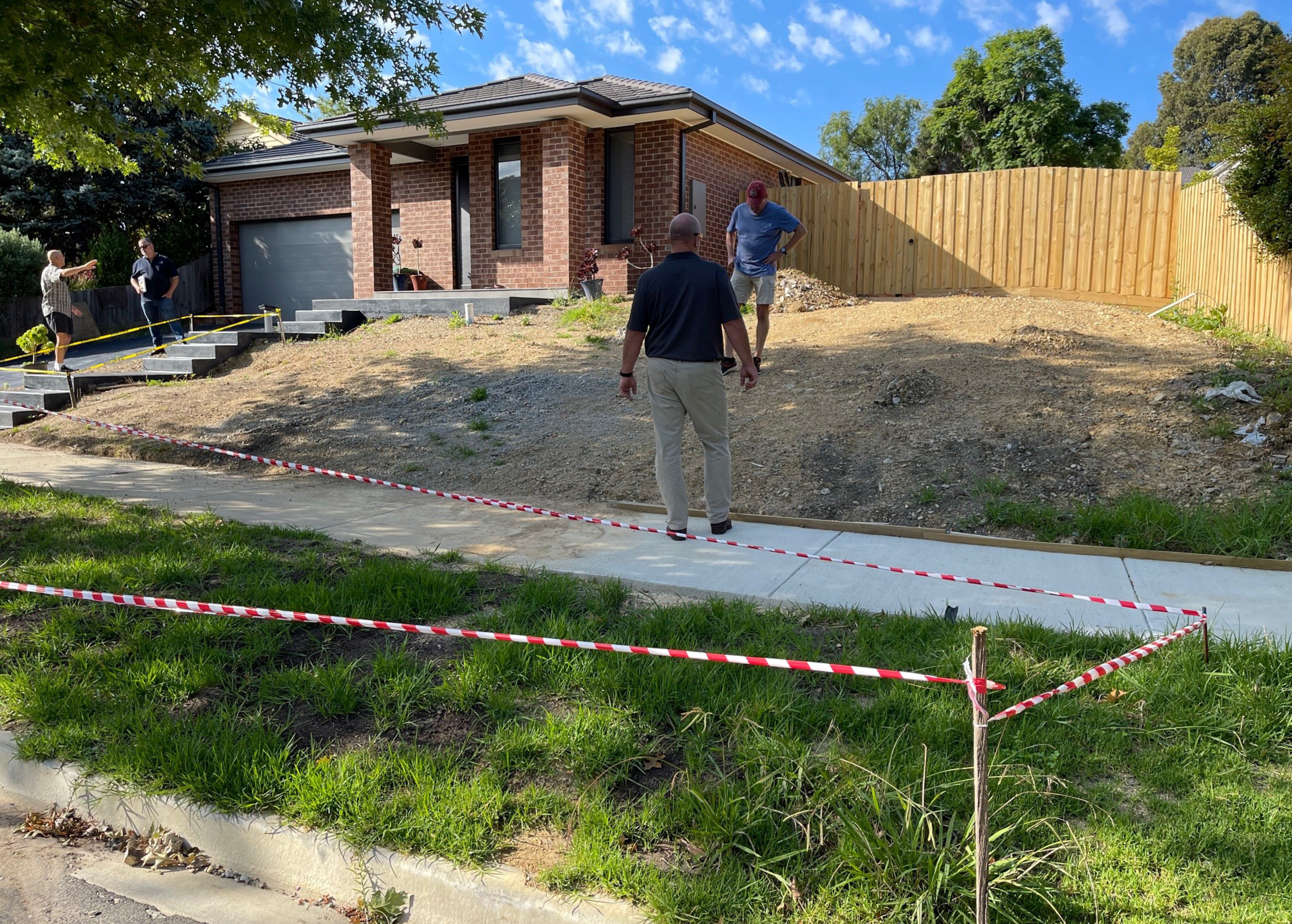 Nick was keen for the whole area, surrounding the new house, to have full ground cover so he could use the yard and then come back later and develop garden beds when his budget and time allowed.

He is not much of a gardener and therefore wanted a turf solution that was hardy, he couldn’t kill and looked good.

The answer to his yard problems: Lay turf, as it would give the yard “full ground cover” and turn the area into one Nick could happily use – almost immediately.

The ideal myhomeTURF variety for the site, based on Nick’s needs – which are – hardy, tough wearing but a good-looking grass is Kenda Kikuyu. 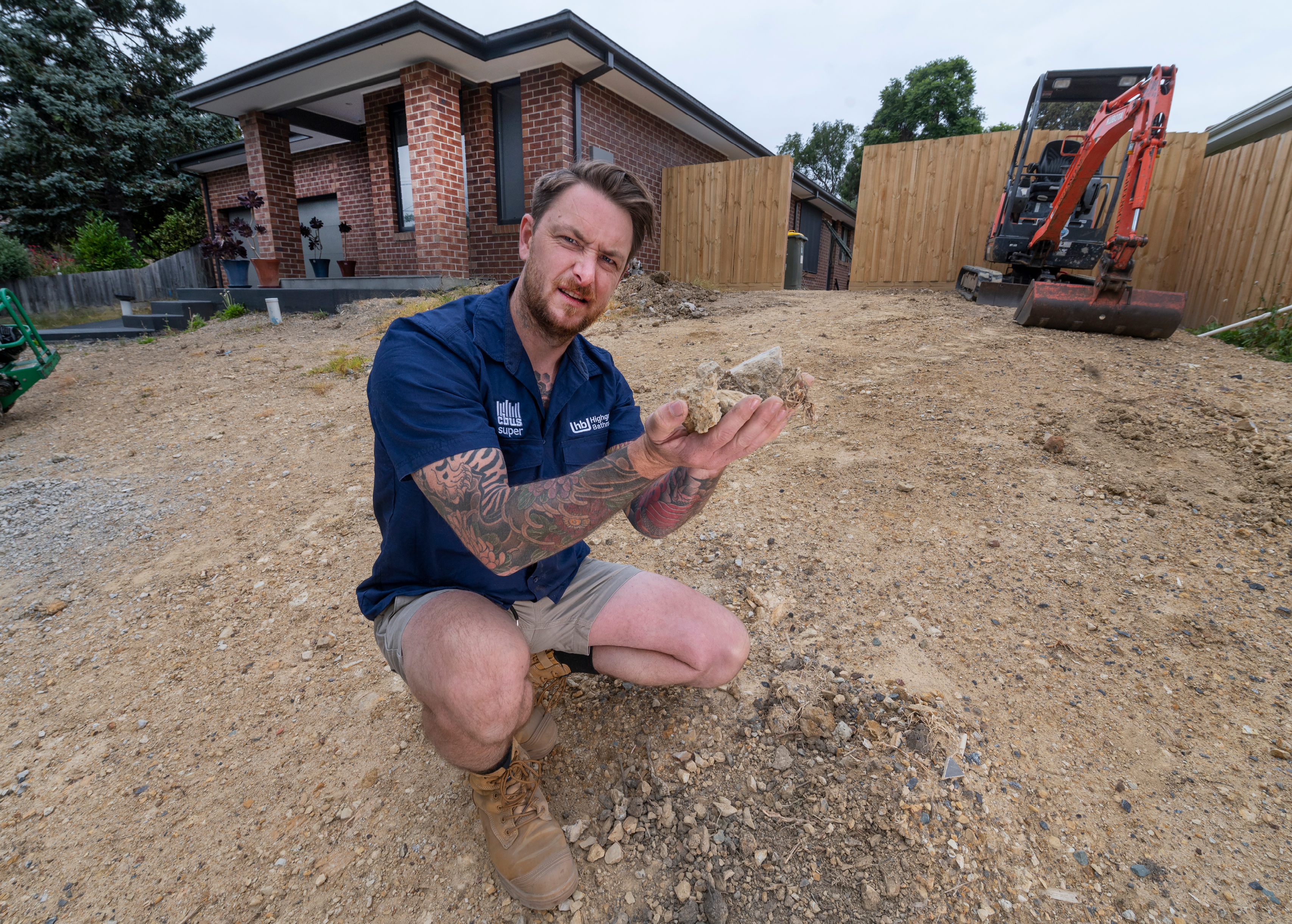 Once you know what sort of turf you want, plan ahead, measure the site and order your turf – usually allow about a week from when you contact your supplier to when you need your new lawn.

Now measuring your yard is easy – use a tape measure and calculate the length and width in square metres required – make sure you add an extra 5% more onto the figure. It is always better to have a bit more than not enough!  We have an easy to use online turf calculator to help you.

For Nick’s place we needed 200 square metres of Kenda Kikuyu.

For Nick’s size job, both the site preparation and the laying of the Kenda Kikuyu can be done in two days.

First, we had to think ahead and make sure the entire site was properly prepared, not only for the Kenda Kikuyu but also for any future garden beds. At this site, where there is no existing ground cover, we got away without spraying out weeds or old turf – usually you would need to allow at least two weeks to do this.

However, Dale and the myhomeTURF team did need to bring in some “big toys” from their landscaping friends at Greenscene Environmental Solutions.

The “big toys” included an excavator to reshape the front yard and move any existing clay that was sitting at the bottom of the hill.

Often, whilst you are building your new home, you can have your builder move the existing clay off the site before they hand over the keys.

The excavator will also be able to scrap out the old turf from the nature strip making light work for Nick, Dale and the team. 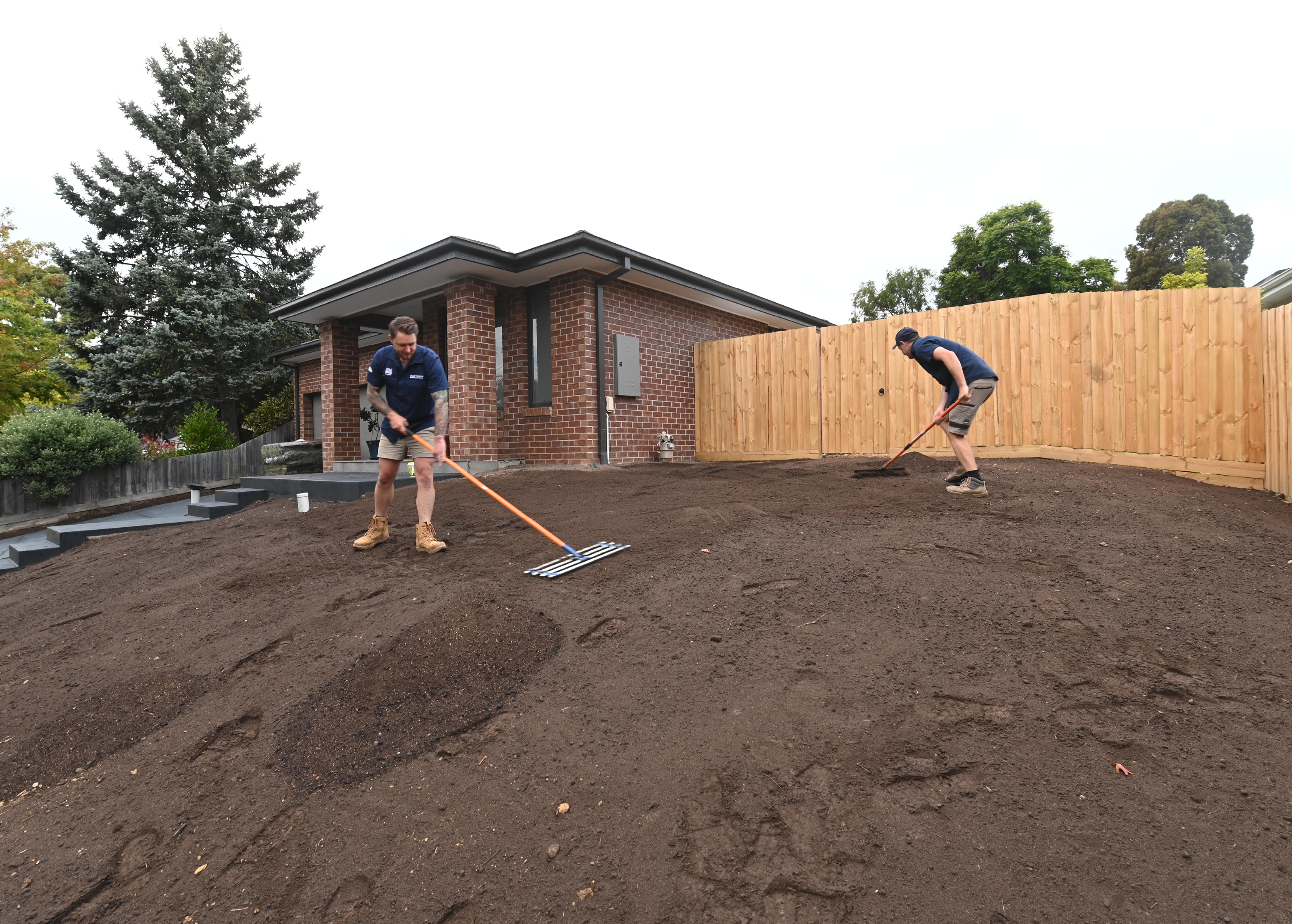 Once the site is appropriately levelled, we need to give the new turf some quality topsoil to grow into.

But before the new soil was laid, Dale suggested to Nick he add gypsum to aid the soil structure because the team is working with heavy clay soils.

The gypsum increases the Calcium levels which overall helps improve the health of the new lawn.
Also add a good dose of organic fertiliser in the form of chook poo!

When choosing your topsoil, it is important you know that it is of the highest quality and weed free.
When laying the soil, it should be at least 50mm to 100mm deep and 20-30mm below pathways or driveways.

Level off the soil with a rake and make sure the prepared base is firm enough to walk on, without sinking into the surface. Dale also applied an Under Turf Starter Fertiliser and Water Crystals to help the soil retain any water and provide a healthy soil medium for the roots to grow into.

Under Turf Starter Fertiliser comes in 2 handy sizes 900gm for the smaller yard or 4kg for a more sizeable area.

You are then ready to lay your new lawn!

About the turf – Kenda Kikuyu

Kenda Kikuyu is one of the hardiest, best looking, and grasses available on the Australian market. Kenda Kikuyu grass also continues growing in winter when other warm season varieties stop. Which makes it popular in the southern states.

It thrives in full sun and is the ideal lawn to handle all kinds of wear and tear of a busy family – whether it be large dogs, active kids or backyard parties.

Unlike common Kikuyu, myhomeTURF’s Kenda Kikuyu is bred to be sterile and produce minimal seed head – meaning it’s less inclined to spread into your garden and is great for allergy sufferers.

Kenda Kikiyu is one of the premium turf varieties myhomeTURF recommends for homeowners in Sydney, Melbourne and Adelaide.

Your local grower suppliers can easily be found with our online supplier locator tool.

Expect to pay between $7 – 10 a square metre for Kenda Kikuyu.

Dale and the myhomeTURF team want to thank Australian Seed and Turf for supplying Nick with this sensational, premium quality Kenda Kikuyu.

Now the fun begins! It’s really important that you install your lawn immediately once it has been delivered – remember turf is a living plant and requires soil and moisture to survive.

If you are laying during hot weather, protect your unlaid turf by placing the slabs or rolls in the shade or lightly sprinkle with water.

Start laying your turf first along the longest straight line such as your path or driveway. You also may need to rake out/level your footprints out as you lay.

A little tip when laying your turf is to make sure you stagger your joins in a brick-like fashion and use a large sharp knife to trim corners. 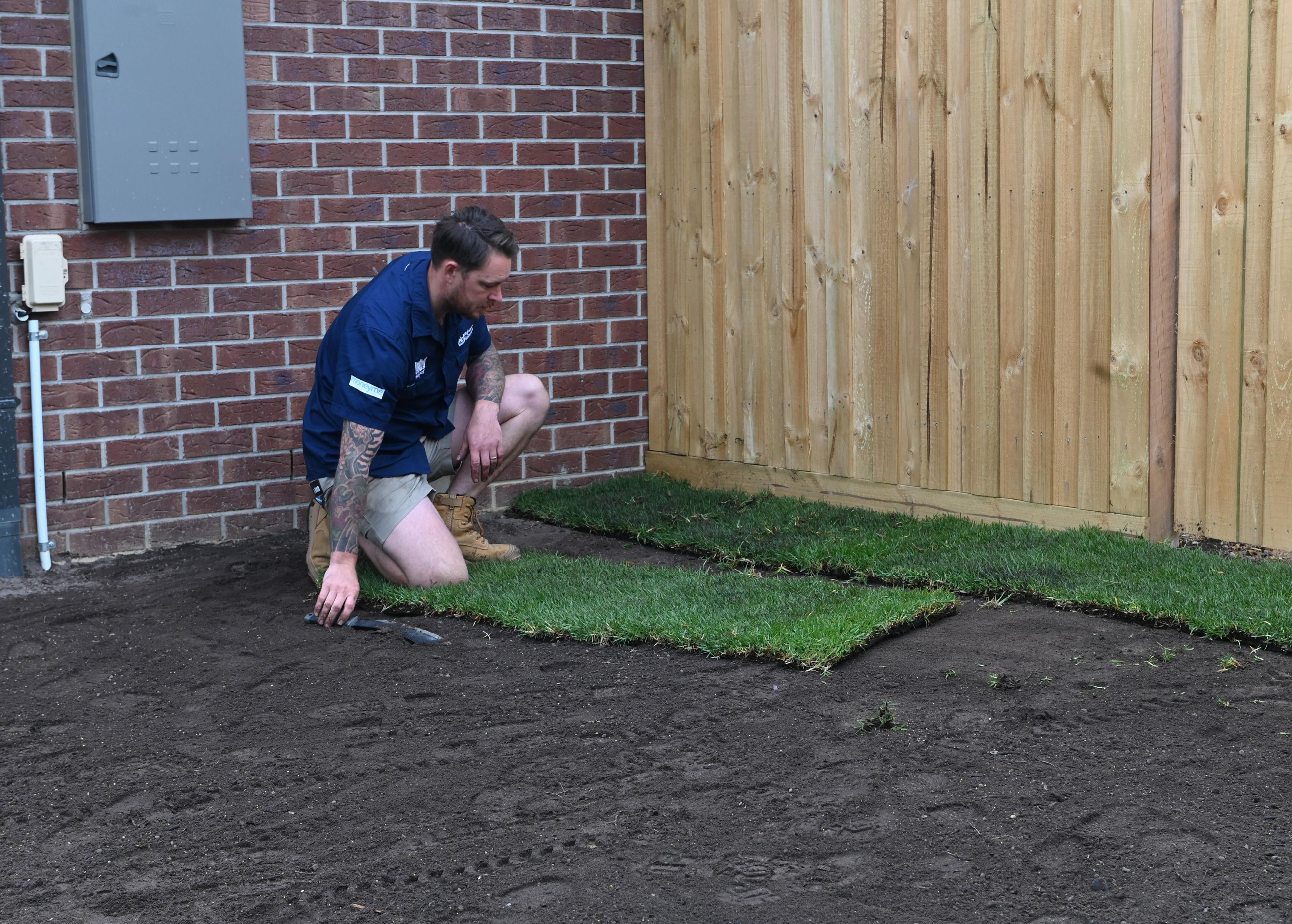 If you continue to lay full lengths of turf together you will end up with the same join line all through your lawn. To stop this from happening, simply cut every first piece of every second row of turf in half and remove it. Then lay a full one – half one and so on … and your joins will be staggered.

Butt and push your turf edges against each other tightly but don’t ever stretch your turf. Dale stressed that when you are laying your turf it pays to take your time. This ensures you make sure your turf ends are tightly packed together, prevents weeds from growing through and provides a level area once completed. Finally don’t leave small strips on the outer edges as they will not be able to retain moisture.

Always try to lay irregular or solid turf rolls around the edges of your yard where you can.
When laying on a slope, like at Nicks place, always place the turf across the slope.

Once your turf is laid, rolling is done last to ensure good contact between the new turf’s roots and the soil. Once your turf is down, the most important thing to do is give it a really good soak.

To establish a new lawn water once or twice daily as required until the roots begin to penetrate the ground – long term once the roots have established move to infrequent deep watering. 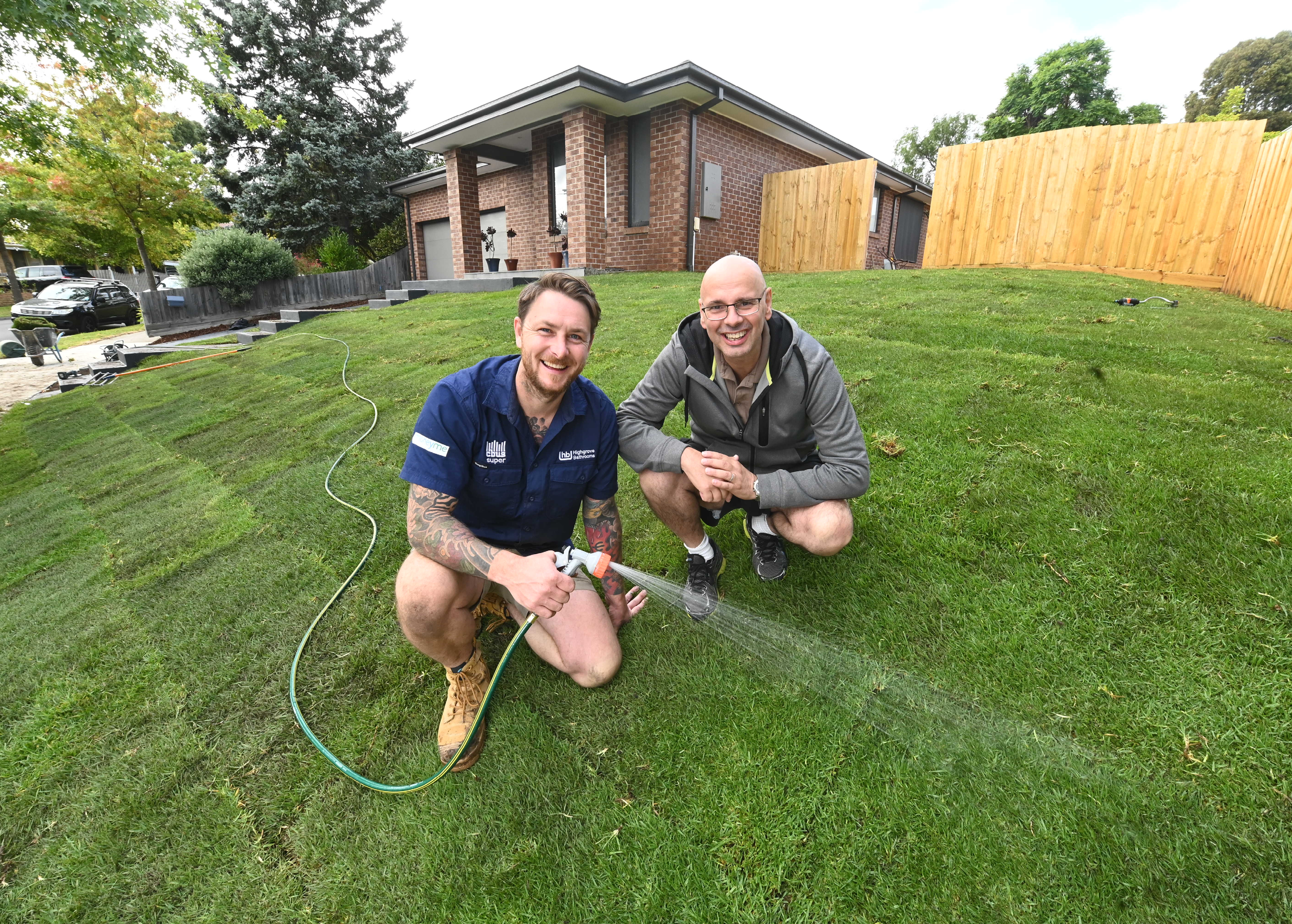 When we see problems with new turf more often than not it is due to lack of water in the early stages of growth.

Also, keep foot and pet traffic off for two weeks.

Only mow your new Kenda once the root system has established. You can check this by pulling a corner of a new turf slab up and looking for white roots going into the soil. 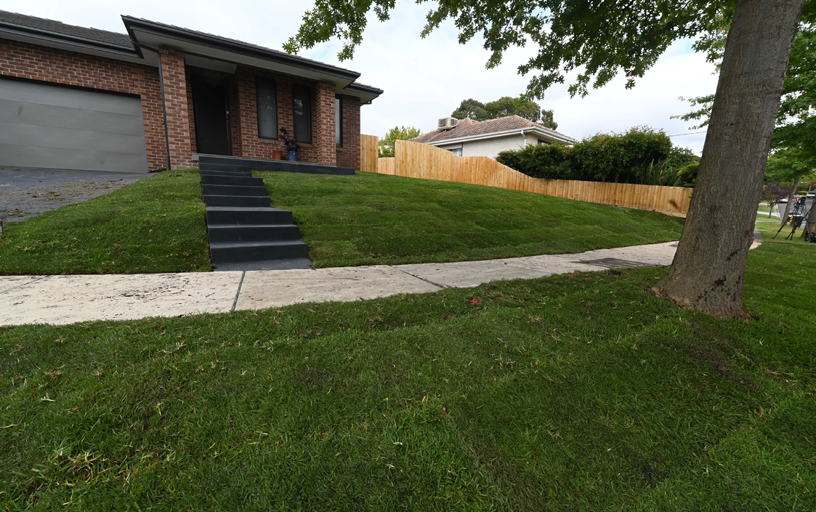 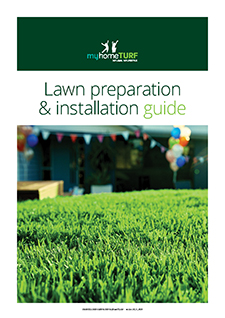 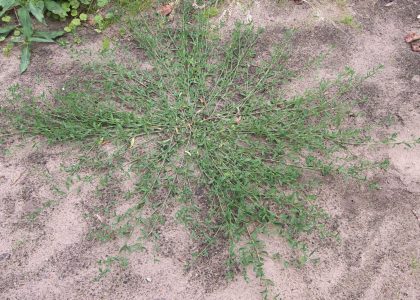 How to get rid of Wireweed

Wireweed (Polygonum aviculare) is a hairless, sprawling annual plant regarded as an environmental weed in New South Wales, Victoria and South Australia. It is a serious weed ...

How to remove Chickweed from your lawn 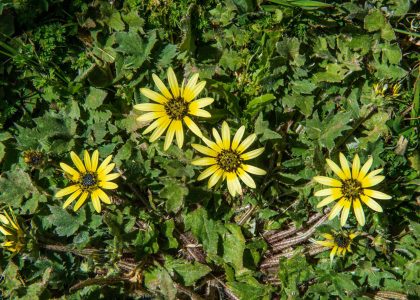 How to get rid of Capeweed

Capeweed (Arctotheca calendula) originated in southern Africa but has become widely naturalised across most Australian states. It is considered an environmental weed in New ... 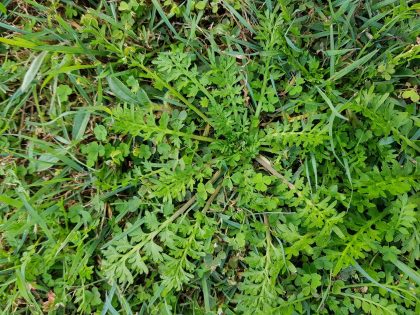 How to get rid of Bindii

Bindii is one of the most annoying weeds and the bane of everyone who loves to go barefoot outdoors in the warmer weather during spring and summer. The prickles are the dried ...

When to apply pre-emergent herbicides

Rather than waiting until weeds appear in your lawn before you decide what to do about them, it’s usually best to plan how you’ll manage them ahead of time. Think prevention ... 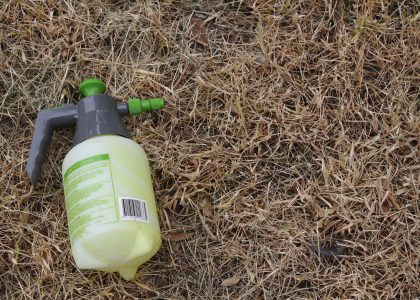 The simple answer to that question is herbicides are chemicals that kill plants or prevent their seeds from germinating. This can be very handy when it comes to managing weeds ... 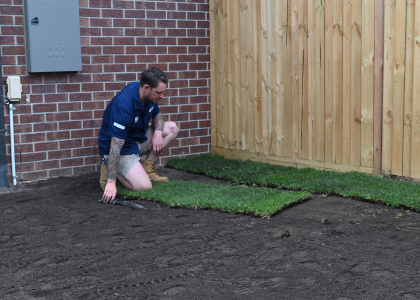 The best time of year for laying turf is usually early spring but, depending on where you live in Australia, there’s usually nothing to stop you from laying turf in winter. ...

You’ve booked your turf delivery but the forecast has changed and, instead of a pleasant sunny spring day, it now looks like being a wet one. Or you live in a part of ... It might surprise you to learn that it’s rarely too hot in Australia to lay turf. Popular warm season varieties such as Buffalo, Couch, Zoysia and Kikuyu thrive in the heat. ... 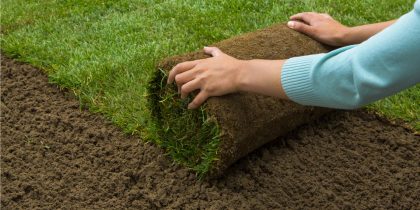 Can you lay turf over existing grass?

It can be tempting to consider plonking a brand new lawn on top of the ratty old one you want to hide. After all, builders are known to put new tiles, carpet and vinyl over ...